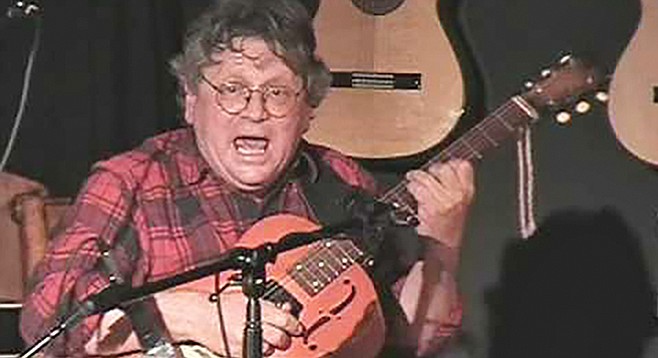 “Being with the prisoners was a very rewarding experience,” says acoustic blues singer-guitarist Robin Henkel of volunteering for Jail Guitar Doors, a guitar and songwriting workshop then held at the East Mesa Reentry Facility, a sheriff-operated jail in Otay Mesa. “I would usually play a few blues tunes, talk about the music, and pass the 1937 National resonator guitar around the group of about 12 guys, so they could feel and appreciate the weight and age of the instrument up close. More than my performance, the program was more about them getting their hands on the guitars.”

Henkel next began heading up weekly prison sessions at R.J. Donovan Correctional Facility. “Unlike the jail, some of the prisoners were allowed to have their own guitars. Some could already play, some were total beginners. Jail Guitar Doors furnishes guitars they can use for the duration of the several week workshop. We tried to impress upon them that songwriting is less about playing the guitar, and more about the personal expression of getting your feelings out.”

“Being with the prisoners was a very rewarding experience,” says acoustic blues singer-guitarist Robin Henkel of volunteering for Jail Guitar Doors”

Songs are constructed with each student’s participation. “We would ask them to pick a topic from a list intended to inspire personal feelings: redemption, family, addiction, pain, loneliness. They would write in composition books and, after 10 to 20 minutes, they shared what they had written. Usually a rhyme scheme, melody, and simple chords would emerge. After a two hour session, each of two groups would present their song. The songs were usually created by taking a line or two from each person’s writing. The point is to get them all involved.”

He mentions one session with around 16 guys from Alpha Yard. “Three of them were rappers. After adjusting to style discrepancies of Memphis versus West Coast, things got going really well… I was doing the chicken scratch bit on guitar while these fellows threw down. Whoa! When one of them finished, the next guy jumped right in, unrehearsed. It was pretty impressive, edgy, down-to-earth, for-real stuff.”

Henkel says winding down from such encounters can be a challenge. “Upon leaving each session, the staff would buzz open a couple of gates and metal doors to let us out. After turning in our visitor nametags and getting our IDs, we would leave the building. I would always feel a strong emotional feeling from what we had just experienced… seeing a rabbit or crow on the [prison] yard inspired some inward reflection about freedom versus incarceration.”

Jail Guitar Doors (named after a Clash song) has other teachers involved in the programs at Donovan, each running 10 to 12 weeks, include Gabe Rosales and Astra Kelly. "There are three workshops at Donovan on Wednesday," says Kelly. "I do the morning one...from what I hear, my morning one is quite a bit more intimate and very different from the others on the yard."

Prisoners find out about the classes via word of mouth and sign-up sheets in housing areas. Each course ends with a graduation ceremony where inmates receive a certificate from JGD, along with credit for the class that can translate into time off of their sentence. Guards are present in the yard, but not in the workshop itself.

"There's space for 24 inmates between the two classes," says Kelly. "So far, the morning class is smaller, six to nine guys, and we've been able to dig in pretty deep. I'll throw out a topic toward the end of a class and have the guys write about it throughout the week. Then, when we get together the next time, we discuss, share personal experiences, and pull lyrics out of their writing and our verbal exploration."

Although Kelly has recorded home demos of songs created by inmates for class reference purposes, so far no recordings exist of the inmates playing their own music. "We're not allowed to bring in recording equipment as of yet, but we're working on it. Ideally, I'd like to have recordings of the guys performing the songs."

While Henkel works with inmates from the Alpha Yard, Kelly's classes include men from Echo Yard, but that's not the only difference in the two instructors' initial experiences. "Before I went in, I was terrified," says Kelly, "mostly just being a woman going into a men's prison and being afraid I'd be uncomfortable in that atmosphere. I was afraid I wouldn't be respected or that I was throwing myself to the wolves. I had no idea what hat I was supposed to put on going in there. I ended up deciding the badass musician hat, like any other day, was best. After the first day in though, I had a much clearer picture of things."

"The yard where these types of workshops are happening is very mellow, considering it's an experimental yard that inmates earn the right to be on. When I first met the inmates, they were all very gracious and respectful. I had the sense that none of them were willing to sacrifice having it pretty damn good on that yard."

A Word from Wayne...